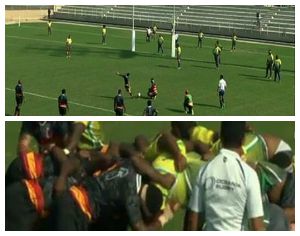 The PNG Pukpuks made it three out of three with a massive 58 points to 19 demolition over the Solomon islands this afternoon at the Sir Hubert Murray stadium in Port Moresby.

Having struggled earlier against Tahiti, then imposing themselves over American Samoa, the Pukpuks were looking to carry that momentum against a Solomon Islands team that had been disappointing throughout the tournament.

The Solomon Islands were the first to post points, through half back, Izzy Thakiu, before Nigel Genia would continue his form with the boot.

The PNG Pukpuks dominating the opening exchange with the first try for the home side, going to Rabbie Namaliu Jnr and soon after, Butler Morris, followed by front rower Wesley Vali.

That dominance continued as the Solomon Islanders could only barely manage to cross for their own.

The Pukpuks had taken a 22-5 lead into the halftime break.

The second half continued with the pukpuks maintaining their aggressive attack; Nigel Genia again instrumental, at scrum half.

A yellow card was handed to Liebert Suang for a high shot on Moses Moetai marring an otherwise stellar performance by PNG.

Paul Nelson putting the icing on the cake with just moments remaining, for the Pukpuks to win by an impressive 58 points to 19 over the Solomon Islanders.

Pentagon teams up with Apple, Boeing to develop wearable tech